Made in Japan
To the world of everyone who wish to better bicycle life, try out to play on each product page.

Click on the image!  When you click on the product image will change the bottom to the type of product page
＊お使いの自転車に合うお探しの商品のタイプをクリックしましたらHPの下の方が商品ページに変わります、商品選びのコツは後ろがヘッドレストの椅子か、カゴか荷台かと言う事です、その他はバイク、３輪自転車、電動車をクリックしてください、なお前は余り関係なく、２０インチのギュット、バビー等の前カゴモデルだけお聞きください！ 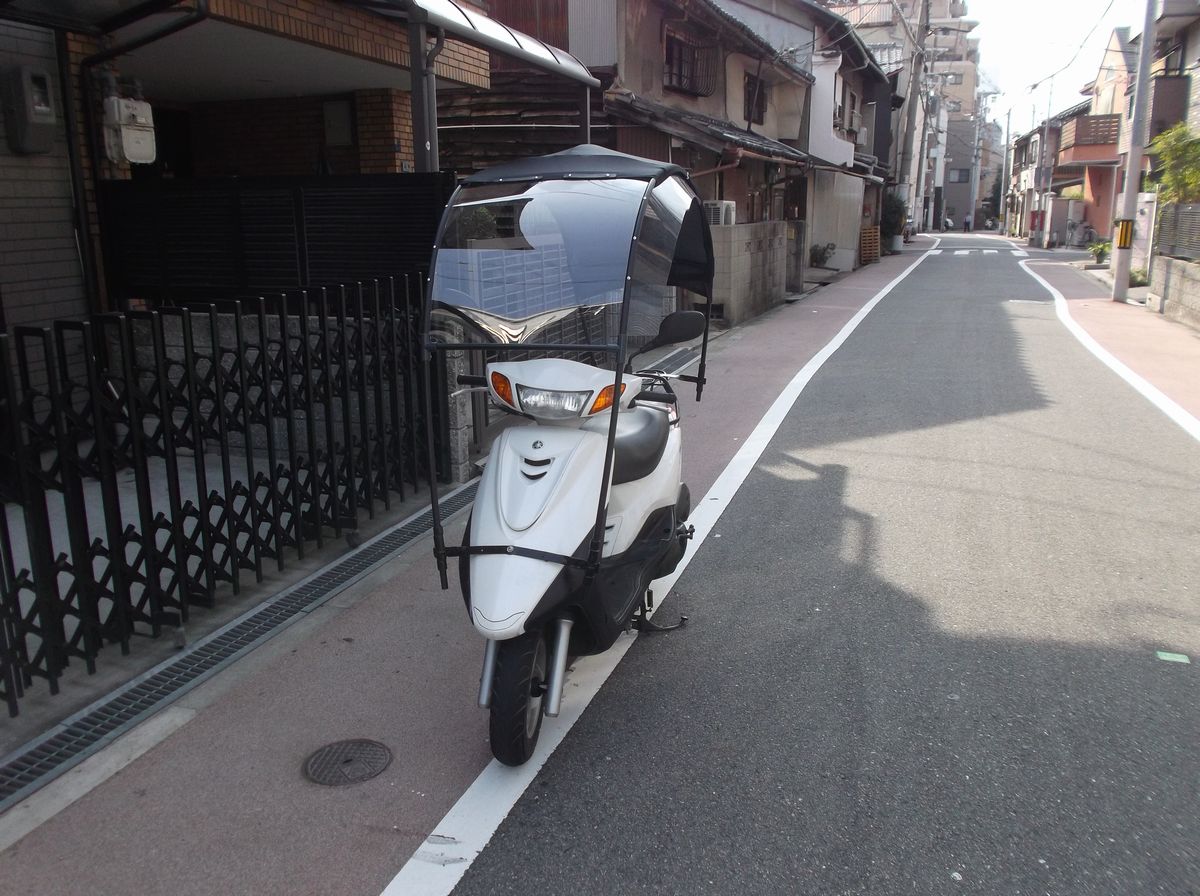 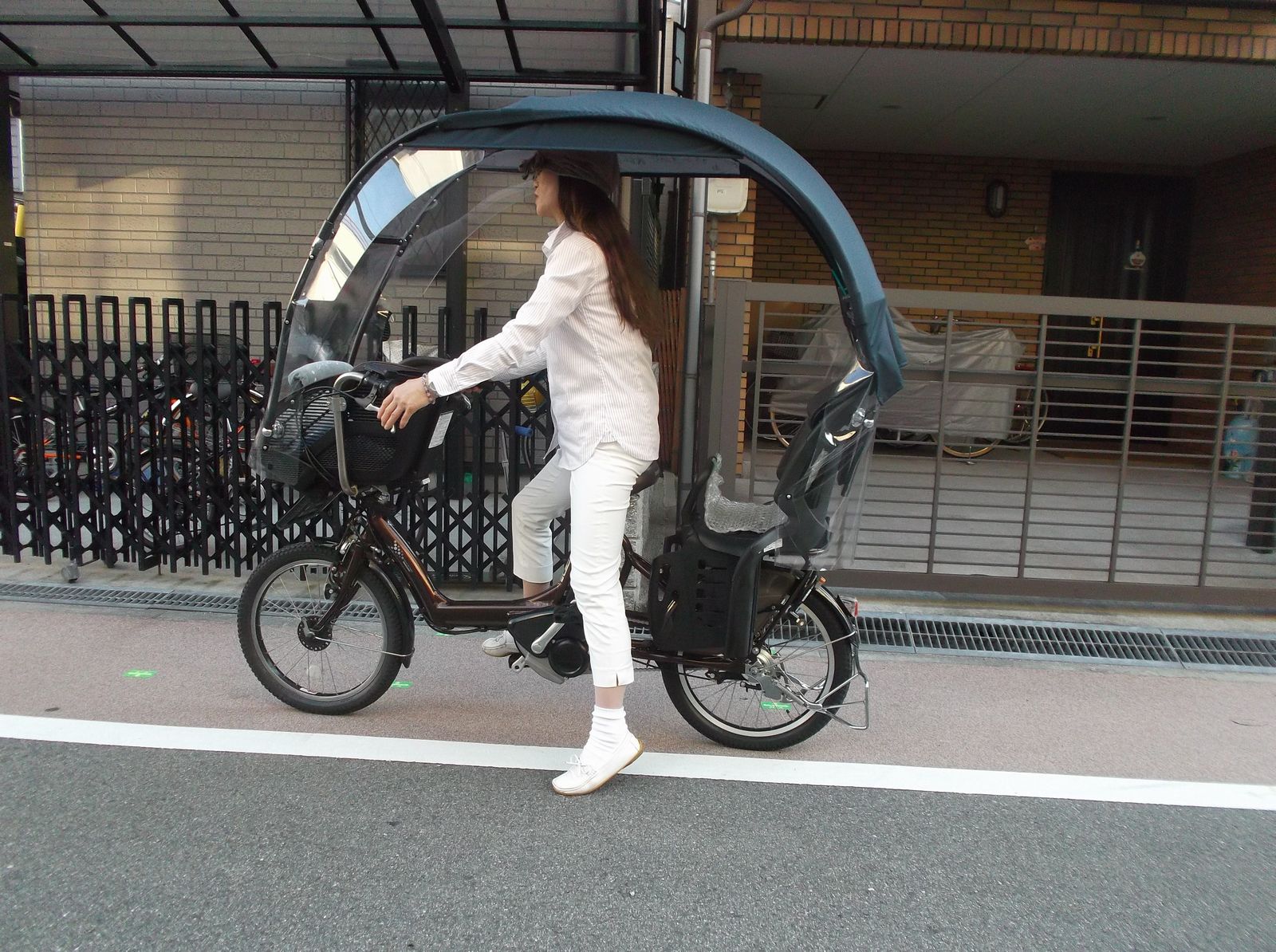 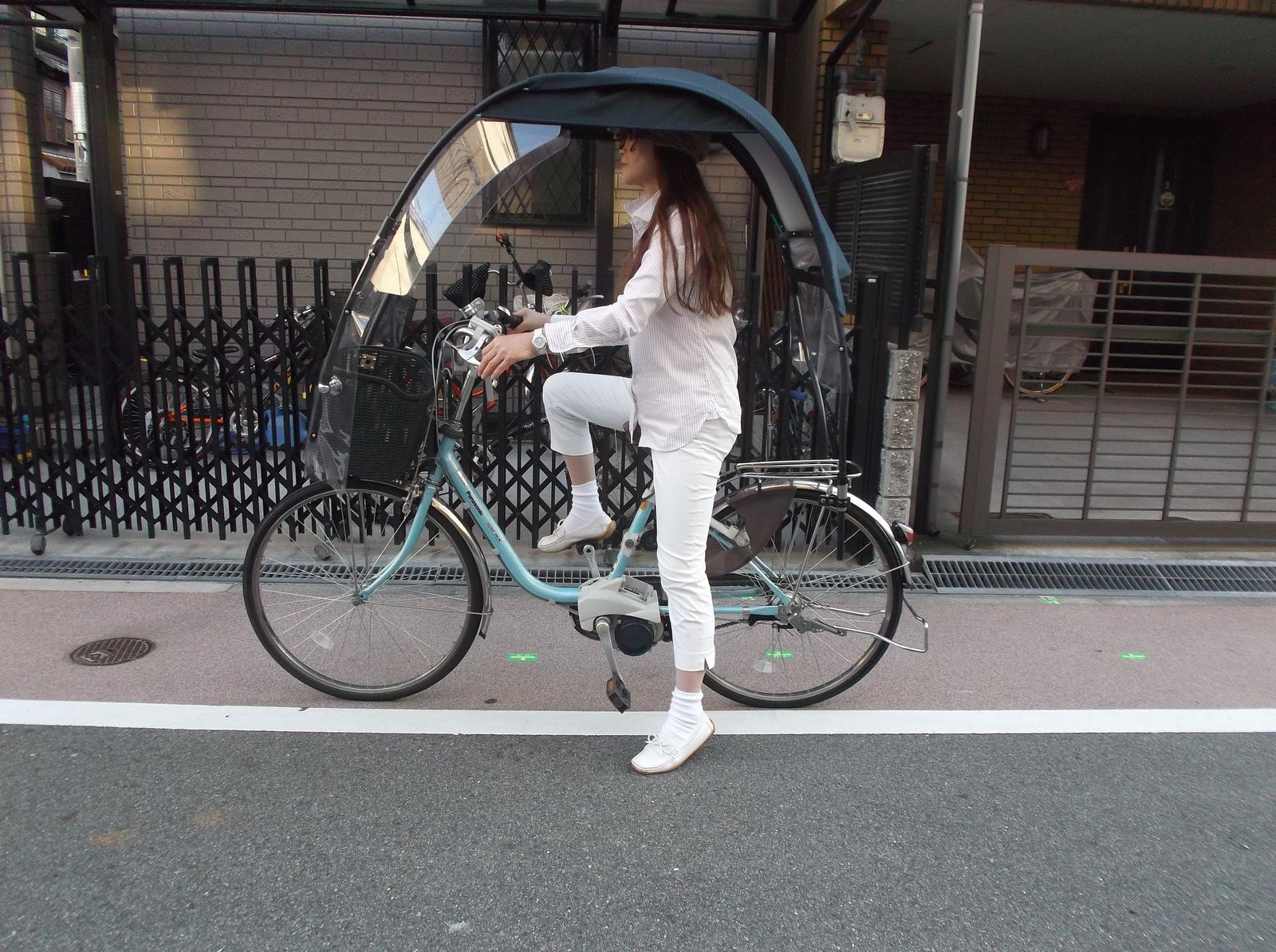 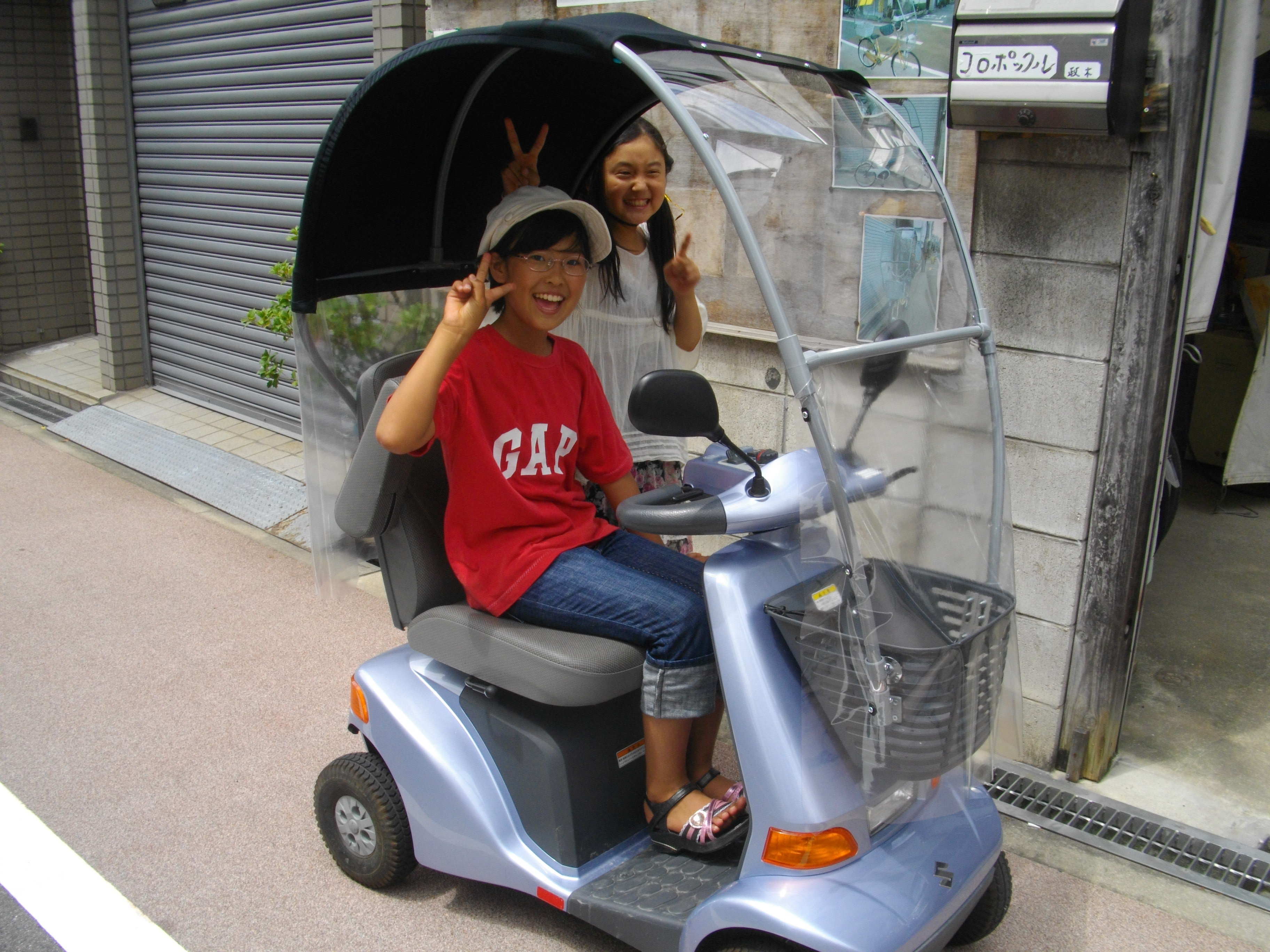 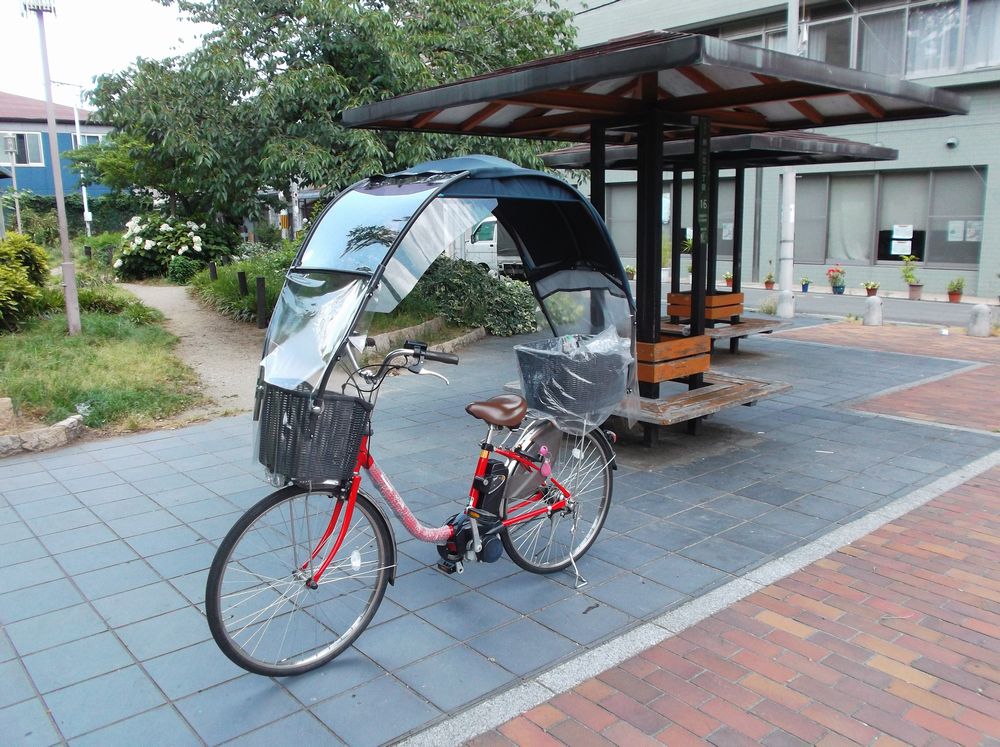 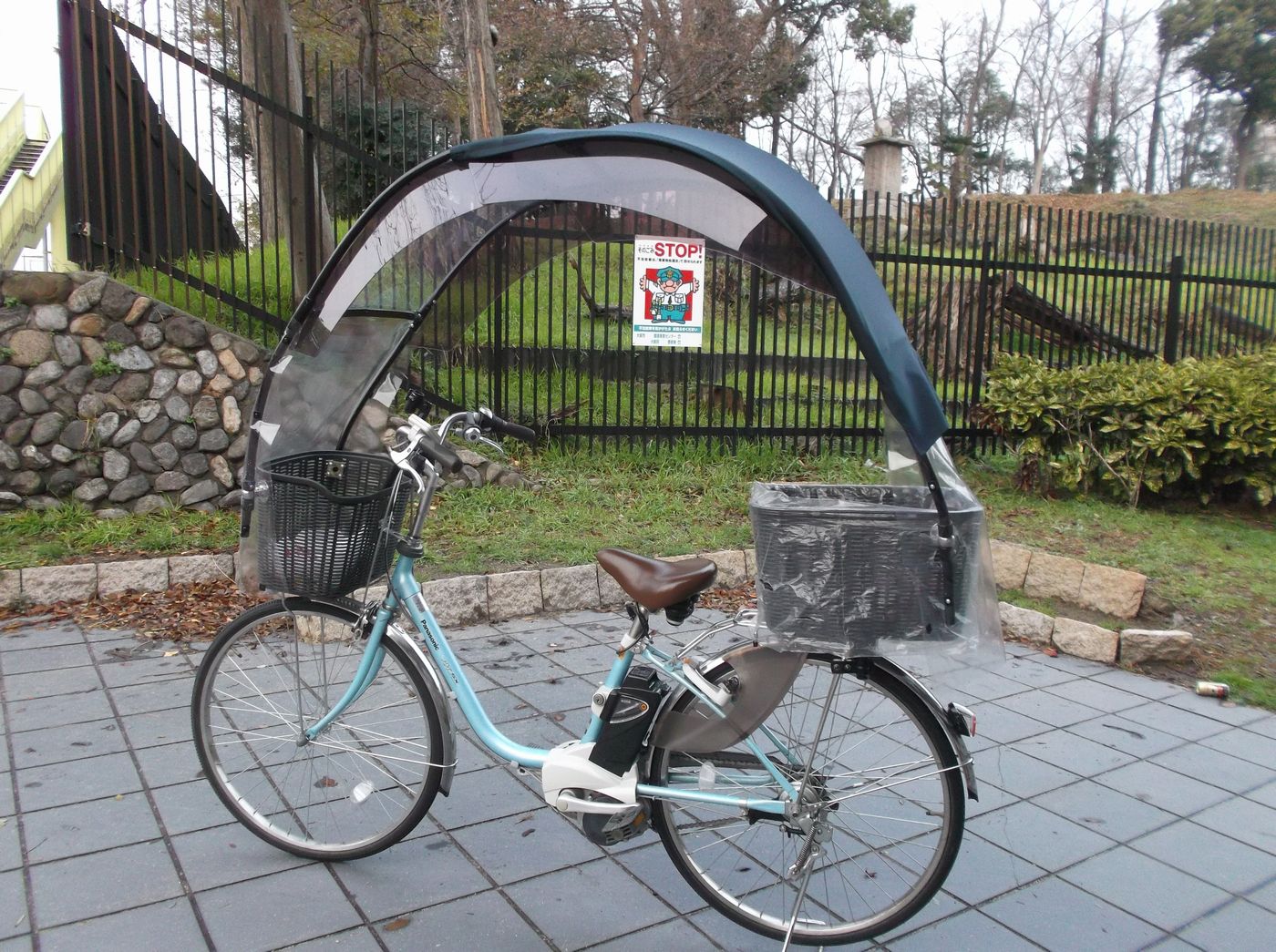 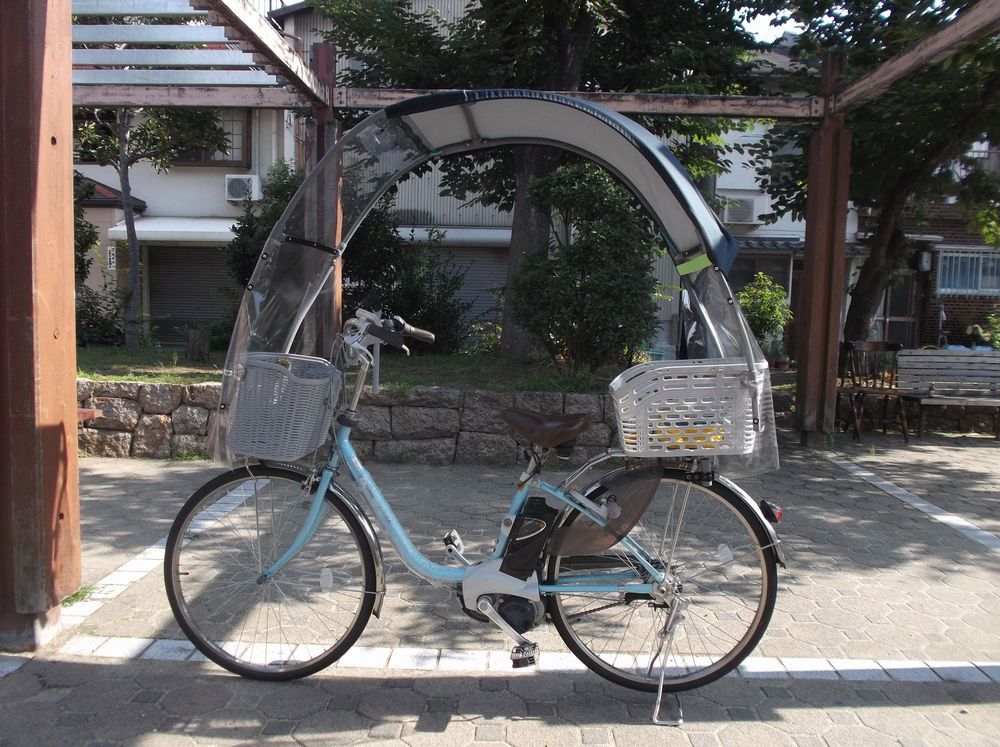 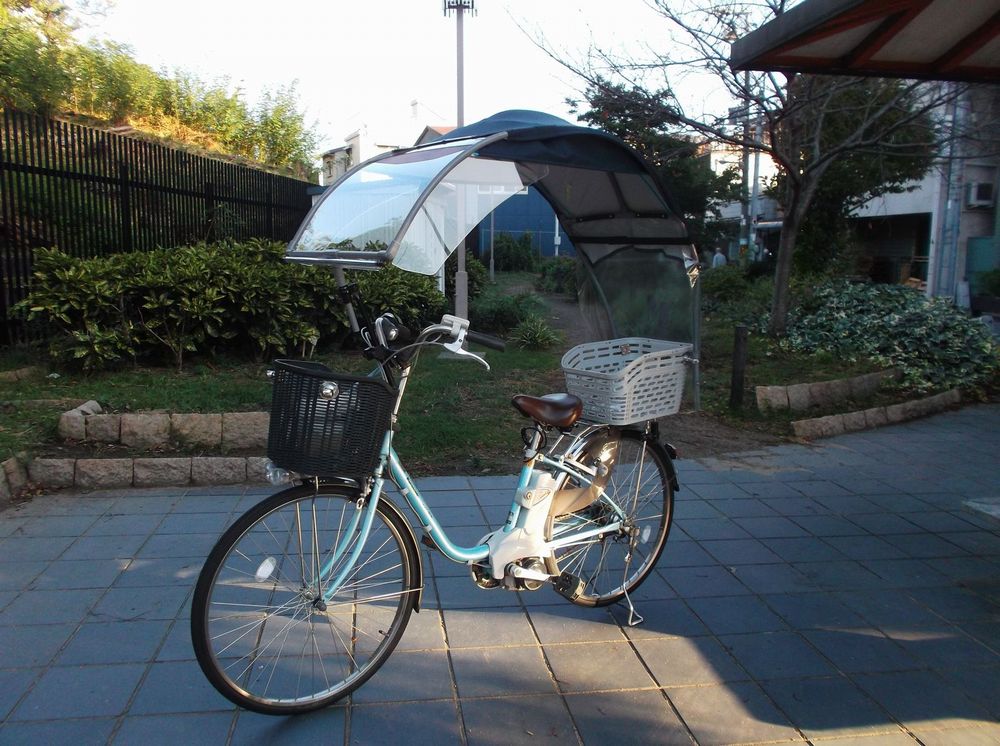 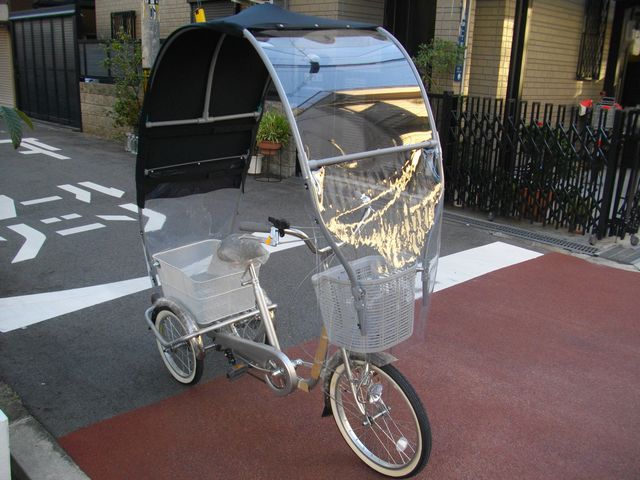 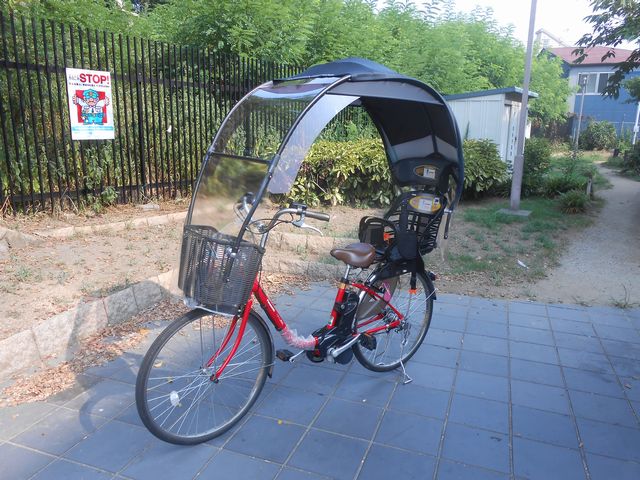 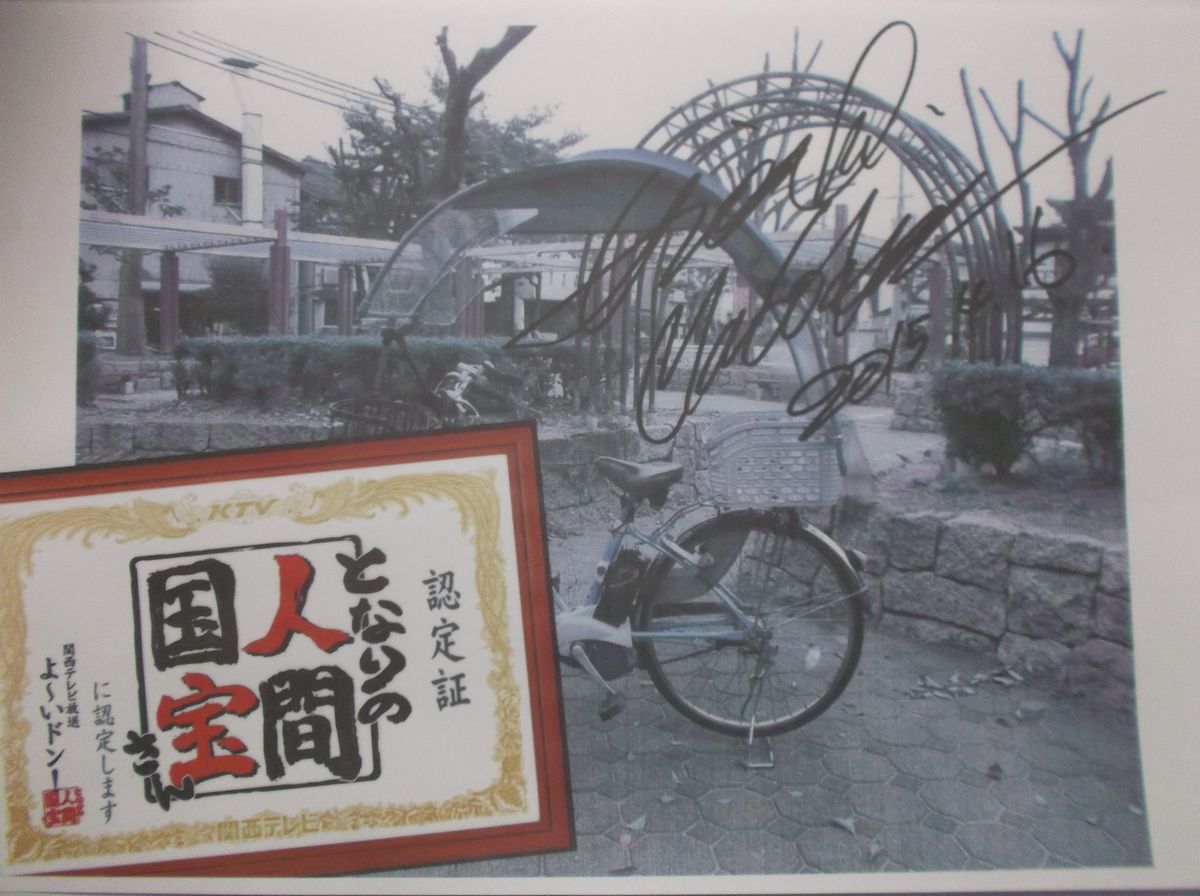 Comfortable roof which is convenient to bicycle


Welcome, and I help you?
I am a small company that has developed a roof on the bike in Japan, the company name is called the Koropokkuru.
Currently, I am thinking whether it is vehicle indispensable bicycle as means of transportation in many countries also, in Japan.
In addition, now that the change in the global environment due to the destruction of nature, celebrated its global warming, other animals that co-exist in the Earth does not have escaped extinction.
Suppression of fossil fuel because it will hand over a beautiful natural even a little child who entrust the future, as the hope that it is to enrich the bicycle life, also, awnings and weather protection of all seasons, windbreak speaking, the except cold, there is a place you have studied imagine a bicycle also covered, with a bicycle except dust and insect repellent, can respond to them in some places.

So, in order to be present too close to us human beings, to say let's talk about the content and performance of the product, and the bike is not considered to be a thing It should be a universal to the nature also, on the application of human you.
For example, first, it is to say that except for the rain to humans, and except for the sun, but there is also a thing to say style, and coolness of while riding a bicycle.
And, It is part of bicycle say bike is or fall in the wind in parked also, or fall between, for example, riding, corresponding and not work against them, and useless! 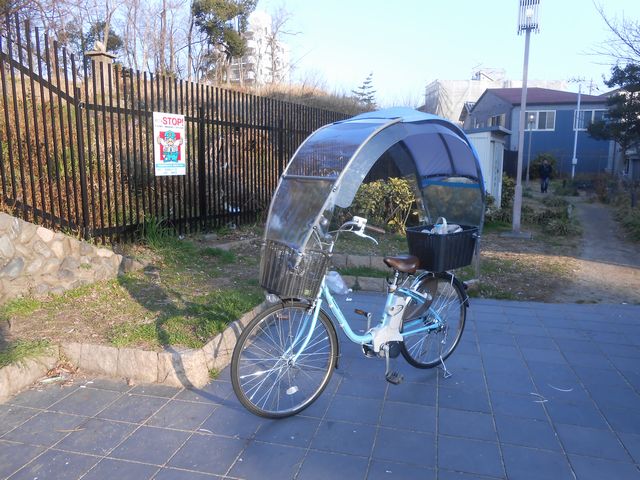 There are also other price is the price that is acceptable to the common people.
On the other hand, with respect to nature, or more the screen is attached to the roof, there is a problem that the air resistance.
And it is that to say the wind and rain, the sun rain and wind, sunlight, from the side from the previous.
In recent years, for example, on a clear day of weather, that heavy rain or raining suddenly Many, environment, and also leads to that you say that you say the bicycle is the versatile, and live a bicycle life without the worry always in Japan I think it will also lead to protection.

I began the sale of products to overcome the challenges of nature and challenges, human, and also meet the challenges of the structure of the bicycle.
Now, let's talk about what to say and why did they overcome.
First of all, and, as used in semi-permanent so that lightly to cut the handle, and, to cope with air resistance and wind of nature, strongly, so as not to rust, it does not corrode, cool style as make, processed it was thought while riding strength so as not to fall even, each of the parts required for the bicycle life and, as with freely, and to not deform when you fall on parked bicycles, everyone will notice that in that it is a frame.

So, what's going on ? ... It is to say , but I ride every day by yourself with a roof to bike and use the material to be considered a variety of .
First , metal is heavy, and to be transformed in the light aluminum
Cost is too expensive , the price is very high in the alloy that stores shape .
First , it is possible to get somehow to the public about 300 U.S. dollars to 600 U.S. dollars is made for business in dollars .
We reached the material now through that you say durability rot fell a tree in from of the above problems , strength is ... weak and processing carbon , in graphite .
Nor is soft like rubber to say it is not broken even stepped on a large track , whether .
And the weight of the frame for one light bike all is said and done is not rust in less than 1 km , I can say the frame of semi-permanent .
Well , workability and high performance that stores all is said and done shape .
It is semi-permanent and ultimate say , and us to support yourself freely to nature Once you can do shape once .

For example , let's wind of 40m ~ 50m is blowing from the front , can you feel it frames the roof but not a creature .
You can fall down , weeds will be ramshackle and , as of weed growing in grassland like , but this material is something of coalescing weeds and large tree .
It is that to say that does not move in the weak wind , and the exchange will wind Shi is accordingly high winds ramshackle blows .
It is that to say at first glance , you are provided with the flexibility to have a solid look , a material having the property of the combined rubber and plastic wood and iron .
In addition , the cost is relatively cheap !
Frame is made of such materials , moreover , can buy material to people of distant lands and distant exchange is also , can by removing the parts also partially Also, all dismantled , the parts structure that can make have brought .
There was an roof of bike that can be used for semi-permanent by creating your own , you can also buy from me of course .
In other words , it is possible to also buy each part of the frame , and it has a structure that can also be make your own . 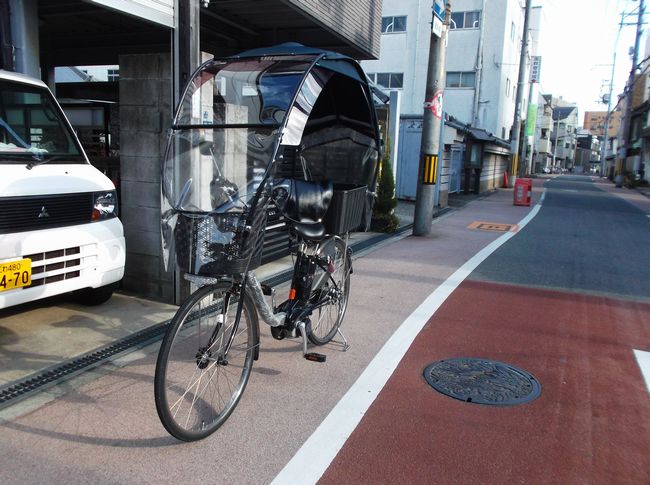 Let's take a description of the roof of the bicycle, the roof is different depending on the type, but in the roof structure of 1-2 pieces, we have sewn in waterproof fabric.
Has two bones of graphite, durability or would be 2-4 Nengurai!
It changes depending on the intensity of ultraviolet light and environment, especially in the cold country, you may wish to change to another roofing.
For example, the cost is around 30-50 U.S. dollars that the waterproof fabric, such as such as thick plastic panel, even thin iron plate mounting is also possible, be replaced in about 2-4 years if waterproof cloth about the climate of Japan.
In order to get together freely to the movement of the roof, yes you have to use a thin cloth fabric that I'm currently using, is relatively thin, but also, to have also the effect of preventing the ultraviolet rays if waterproof is elastic you, but it is like a bonded fabric to rubber.

Let the story of the previous screen followed .
Do not that there is no durability strong wind from the pre- and air resistance , even against heavy rain screen still in with a frame .
You dangerous if you have broken the glass like a car , and first , and heavy .
And to say that a high cost , and to weak in plastic by then , I was using acrylic initially .
However , a few cases , but will crack during the fall , I am using a transparent screen rubber as united in plastic now .
I have a screen to say by this , it is not broken , or that it is hard to be broken very .
And, on the screen of its transparency , type of roughly is equipped with a sun visor to soften the direct sunlight or say except sunlight .
Material of the part is the part that is made ​​of polycarbonate which is hard to be broken very much , adjusts the air resistance .
Of course, it can be replaced easily .

Then this is the transparent protective cover at the bottom of the front and rear, which uses the material of transparent nylon system you are using, such as table cloth.
Buying in the vicinity when it was torn, you can glue Zhang to cut.
Because I fixed with a small screw on the frame paste the rubber with a seal in the transparent nylon, removal because it is freely by removing some screws, for example, when I take off the cover in hot country, etc., the goods on the roof you will be able to lead a comfortable life bicycle wind unexpected come in air resistance becomes the only wind there.

In a kind of plastic is making a variety of form in the polycarbonate material side part and when I say that followed.
And we have the effect of softening the light visibility even foresee to block the sun also, is that to say during the fall, this also as unbreakable.
In addition, most types of because it is composed of waterproof fabric with a bone, customers are saving customers and distant, you can also make your own easily.
Then I would like I sent a bicycle life to arrange to use a favorite fabric of their own.
Mounting of these levels because they attached a small screw, I that is to say the product which you can use in custom free removal is freedom, That is, because it is semi-permanent frame roof material, cover, etc., in all.

It is attached to the bike at the end, but in the case of the handle shaft and install the hardware to handle, or the part before attaching the bracket to both sides basket.
It is to say put the metal fittings of the carrier for the carrier for, to attach the brackets to the chair to chair, and then install both brackets to the basket if basket later.
And, after a basket bracket before or basket of bracket, used to go with the chair after the bracket has been set on the roof body in most of our products.
However, there is no chair or basket, depending on the type, there is also a type that only bracket is in the roof is set to be attached to the bicycle which you are using now.
And, also the type that you want to handle the previous, there is a type of metal fittings to attach to the handle is in the set, please contact us by e-mail, etc. The visitor of the distant.

In such pipe carrier, such as carrier also will be to pattern that should not not have to drill a hole in the metal fittings and exits.
You be able to see if I had you send a photo of the parts and the mounting portion by e-mail.
So, when you talk about that you say the ride and what of, first, can some height adjustment, the case of overseas customers, and if I hear the height from the ground of a bicycle saddle and sitting height, height in the production stage it is also possible to increase the adjustment range.
Once, remove about 5 minutes, why not experience a comfortable life exhilarating bike After installing?
And, why do not spread to the world together this business? Also be ride if you can come to Japan, putting the hand can also be made.
Oshiawase to everyone ... In! 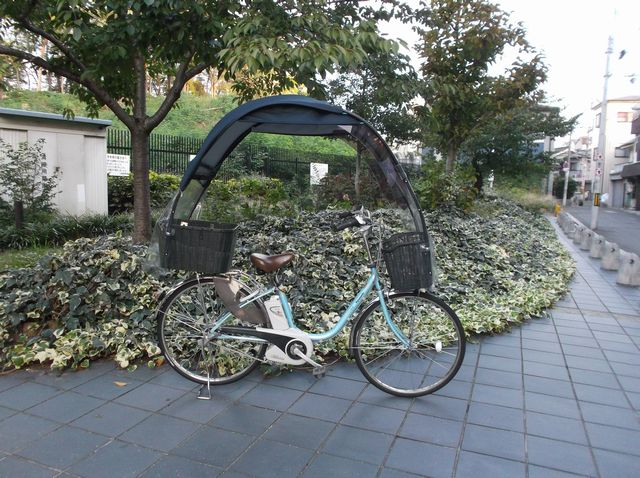